SOLUTIONS TO THE NEURODYNAMIC TEASERS & FLEXORS 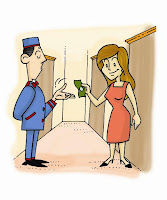 Adding what the teachers paid to what the bellboy has is meaningless. One thing has nothing to do with the other. Each person initially paid $10, giving a total of $30. They then received $5 from the bellboy. 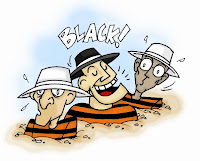 Prisoner C calls out the colour of his hat correctly. His reasoning: A and B cannot see anyone, so they’re out of contention. D can see the hat colour of B and C. If they were the same, he would have called out. Since he stays silent, and can see that B has a white hat, C reasons that he must be wearing a black hat! Voila! 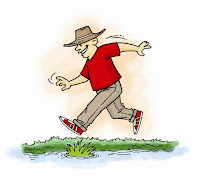 Amigo stands looking across the river, and then simply adjusts the brim of his hat so that his eyes just see past the brim to a point a little beyond the other side of the river, on the opposite bank.

Maintaining this position of head and hat, he turns his head, and looks past the brim to another point on the ground on his side of the river.

Taking note of this point, he now walks towards it, with measured, deliberate paces. An estimate of each pace multiplied by the number of paces to the spotted point gives him the approximate width of the river.

[Excerpted from the Braintertainment segment of 'Unleashing Genius with the World's Most Powerful Learning Systems', by Dilip Mukerjea. All the images in this post are the intellectual property of Dilip Mukerjea.]
Posted by Say Keng LEE, KNOWLEDGE ADVENTURER AND TECHNOLOGY EXPLORER at 5/11/2009 07:16:00 AM