MOVEMENT IS ESSENTIAL TO BRAIN DEVELOPMENT! 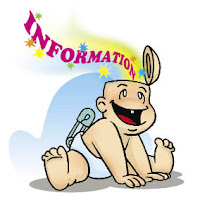 As an extension to my earlier post, I thought it would be a good idea to pull out the following brief essay from the 'Brainbabies' edition of The InGenius Series of bookazines, originally intended for kids & their parents, by Dilip Mukerjea:

As an immature larva, the sea squirt (a marine creature) spends its time swimming around. It can move, see and sense, and it has a wee brain.

However, when it becomes mature, the sea squirt changes its lifestyle and attaches itself to a rock.

It no longer swims around, because it now lives by eating other little stuff in the seawater. At this stage, the sea squirt performs a miraculous act: it eats its own brain!

Because it no longer needs it! No movement, no brain!

Movement is essential to brain development!

[All the images in this post are the intellectual property of Dilip Mukerjea.]
Posted by Say Keng LEE, KNOWLEDGE ADVENTURER AND TECHNOLOGY EXPLORER at 5/11/2009 10:11:00 AM