MEMORABLE QUOTE FROM THE MOVIES: THE BERMUDA TRIANGLE 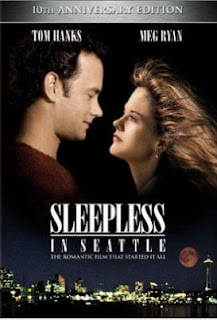 Last night, while watching the romance comedy movie, 'Sleepness in Seattle', starring Tom Hanks (playing Sam Baldwin, an architect who had lost his wife to cancer) & Meg Ryan (playing Annie Reed, who was about to get married to someone else) on StarHub cable television, I was intrigued by one particular dialog which went as follows:

Jay (played by Rob Reiner as Sam's construction buddy): ". . . what do they call it when everything intersects?"

In a nut shell, the movie was about Sam's son Jonah, who was looking for a new mother. So, when Jonah put his father on national radio, hundreds of women wrote to him. One of the women was Annie, who went to great lengths to meet Sam, who had meanwhile started to re-enter the dating game. Sparks flew when they met.

What has caught my fascination is not so much the movie, which of course has been entertaining to watch, to say the least, but a new perspective of creativity, which I would never have thought of.

That's to say, I did not see the Bermuda Triangle as an "intersection of ideas", metaphorically speaking.

I reckon Sam's response as I have outlined above brings me back to what I have written earlier: the 'Medici Effect' or "intersection of ideas".

'Innovation at the Verge' is also the other thing which is invariably connected to the foregoing topic.

As I have always maintained, watching movies can really carry a dual-benefit: entertainment & learning/creativity.
Posted by Say Keng LEE, KNOWLEDGE ADVENTURER AND TECHNOLOGY EXPLORER at 5/01/2009 09:09:00 AM

Email ThisBlogThis!Share to TwitterShare to FacebookShare to Pinterest
Labels: Bermuda Triangle, Innovation at the Verge, Intersection of Ideas, Medici Effect, Memorable Quote from the Movies