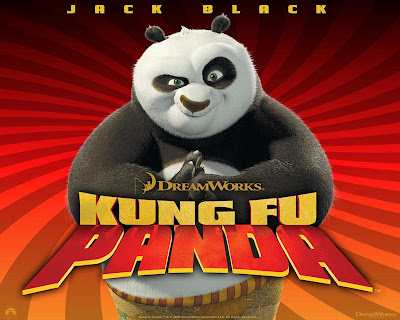 Just a couple of hours ago, I had sat down on the sofa of my living hall to re-watch the really entertaining animation movie from Dreamworks, 'Kung Fu Panda', on StarHub cable television.

I had actually watched it more than a year ago in the theatre.

In a nut shell, the movie was all about the adventures (or misadventures?) of a young goofy Panda named Po (voiced by Jack Black) with big dreams of becoming a kung fu fighter in the village, known as the Valley of Peace.

By day, he was a lowly cook/waiter in the noodle restaurant of his father, Mr Ping, a goose (James Hong; this incomprehensible relationship wasn't explained in the movie) & by night he often fantasised as a side-kick to the formidable fighting quintet, known as the Furious Five, comprising Tigress (Angelina Jolie), Crane (David Cross), Mantis (Seth Rogen), Viper (Lucy Liu) & Monkey (Jackie Chan). They happened to be his fondest idols.

Amusingly & unexpectedly, along the way, he was chosen - & then trained reluctantly by Master Shifu (Dustin Hoffman) to become the Dragon Warrior, but with the blessing of Grand Master Oogway - in order to fulfill an ancient prophecy, under which he had to fight against the vengeful & treacherous snow leopard Tai Lung (Ian McShane).

there are many valuable lessons to be learned from the movie especially for young people, which I had captured the last time, drawing from the witty dialogue:

- Everything happens for a reason. We just have to learn to find the true meaning of the events in our lives. No matter what happens to us, not only does something valuable come out of it, but it may be just what we need.

- Well said, as it resonates with, remember, Rocky Balboa (Sylvester Stallone)? Another day, another struggle.

- As a matter of fact, Rocky's fiery words continue to reverberate in my head:

"Let me tell you something you already know. The world ain't all sunshine & rainbows. It's a very mean & nasty place & I don't care how tough you are it will beat you to your knees & keep you there permanently if you let it. You, me, or nobody is gonna hit as hard as life. But it ain't about how hard you hit. It's about how hard you can get it & keep moving forward. How much you can take & keep moving forward. That's how winning is done!"

3) "One often meets his destiny on the road he takes to avoid it."

- Many of our trials & heartaches are not designed to make us bitter but better in life. The fact is, troubles do not always last, but tough people do.

- The only people I know with no trials, troubles & challenges are those in the graveyard.

4) "To make something special, you just have to believe that it is."

- If you believe in yourself, you can do anything, including creating miracles;

5) "You are too concerned with 'what was' & 'what will'. Yesterday was history; tomorrow is a mystery, & today is a gift; that's why it's called a present."

- Definitely, well said. Humility is one of the hallmarks of wisdom.

7) "You have to let go off your illusion of control."

- This was the vital message from Grand Master Oogway to Master Shifu, as the latter struggled incessantly to understand the ultimate choice of Po as the Dragon Warrior;

- Likewise, sometimes in life, we tend to want to control everything that goes around us, which often cause us to lose touch with the greater picture or larger reality of our life;

9) "There isn't any secret ingredient."

- It's already in each & every one of us. This was reflected in the movie, when Po found out that there wasn't anything written - it was actually blank, with a reflective surface - in the Dragon Scroll, which was believed to grant limitless power.

- Likewise, when he found out, to his dismay, from his father that there wasn't anything special in the noodles, either.

10) "The true path to victory is to find your opponent's weaknesses & make him suffer for it."

- In the movie, Master Shifu grudgingly realised that Po had this natural propensity to hunt for food & would go to great length, with physical prowess, to attain it. So Master Shifu exploited it as powerful motivator for Po to pay attention to his training.

- As a matter of fact, Po also unwittingly realised that his greatest weaknesses - cheeky playfulness, roly poly belly & bouncing butt of fat & fuzz - turned out to be his greatest strengths, when fighting Tai Lung, who was terribly cynical of his opponent. Naturally, his physical prowess following the exhaustive training under Master Shifu helped, too.

- When Master Shifu confronted Grand Master Oogway: "But who? Who is worthy to be trusted with the secret to limitless power to become the Dragon Warrior?", the latter responded: "I don't know."

- In the same vein, when Po challenged Master Shifu: "How are you gonna change me into the Dragon Warrior? How?", the latter retorted: "I don't know".

- One of the hallmarks of wisdom is to realise how limited one's wisdom is. That's to say knowing how little we know... in fact, knowing we might learn something that will lead us to change our judgement on some important topic, as demonstrated by Grand Master Oogway & Master Shifu in the movie.

- In the real world, we often don't like to admit this, for fear of being ridiculed or of looking stupid among our peers. 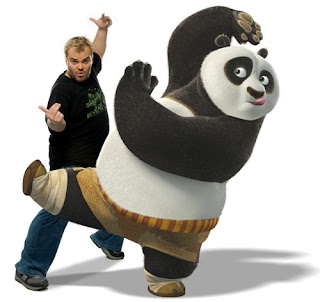 12) A master can only show the path or the way. It is up to the student to reclaim or rediscover the greatness within.

- That's how Po rediscovered his own gift - his renewed self-confidence, courage, determination, perseverance, tenacity against impossible odds, & of course, his genuine love of kung fu.

13) Last, but not least: "There's no charge for awesomeness or attractiveness."

- It's very true. It's already inside all of us, in whoever we are & whatever we do.

Attention, Mums & Dads, if you haven't yet watched it, please go & watch this wonderful movie quickly with your kids & use the movie to share vital life lessons with them.

[Extracted & adapted from my 'Optimum Performance Technologies' weblog, where the foregoing was originally an extended movie review.]
Posted by Say Keng LEE, KNOWLEDGE ADVENTURER AND TECHNOLOGY EXPLORER at 12/01/2009 11:31:00 PM

Email ThisBlogThis!Share to TwitterShare to FacebookShare to Pinterest
Labels: Kung Fu Panda, Lessons from the Movie