My personal musings, inspired by Page 4 of 'The Brainaissance Program of iCAPitalism Seminars with... The World's Most Powerful Learning Systems for... The Learning Economy', by Dilip Mukerjea.] 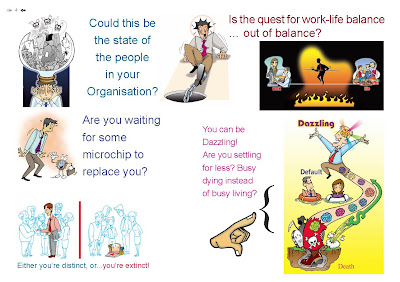 The following pertinent question from Dilip Mukerjea can be quite scary.

I reckon, the only option for us today, as part of our longer term strategy to survive & thrive, is to keep on learning new things, & at the same time, keep on learning to apply technology-enablement to increase our personal productivity, so that we become more productive, efficient & irreplaceable.

I recall my early exposures as a working professional to what futurist Alvin Toffler has once described as "a turbulent environment filled with revolutionary reversals, surprises, & competitive upsets..." as far back as the late eighties or early nineties.

At that time, I had also just started to indulge myself in the beautiful writings of economist Paul Zane Pilzer.

The following jottings in my ideas scratchpad came from his brilliant work, particularly 'Unlimited Wealth: The Theory and Practice of Economic Alchemy':

"... The overwhelmingly largest determinant of success today for both the individual & the organisation is the speed with which they can accept, learn, & work with technological change... Prosperity today belongs to the person & organisation that learns new thins the fastest..."

"Indeed, technology is advancing on so many fronts that the main constraint on innovation today is not so much the capacity of engineers & entrepreneurs to come up with new ideas, but their ability to keep abreast of & integrate the latest developments from fields outside their own particular specialty..."

Just imagine that he wrote all that in the early nineties, & to me, they are still very relevant today.

As a matter of fact, Dilip Mukerjea has recently made a wonderful observation in an expert advisory to a client [actually, an extract from his currently still 'work-in-progress' book, tentatively entitled 'Brainaissance'] as follows:

"Corporations and capital markets differ in their attitudes towards the forces of creative destruction ~ specifically, in the way they enable and manage this phenomenon. Corporations focus on operations. They aspire to function perpetually as ‘going concerns’, and thus work on the assumption of continuity.

Capital markets have no such concerns — they function on the presumption of discontinuity; their focus is on creation and destruction. Whilst corporations may tolerate long-term underperformance, markets have no qualms about annihilating the underperformer.

Outstanding corporations might stand out amongst the downtrodden, but unless they become perpetual learning organisms, the very processes that led them to success will anchor them to failure.

The foregoing insightful observation certainly sums up very well what Dilip has originally in mind when he poses the question as outlined in the foregoing imaginal picture.