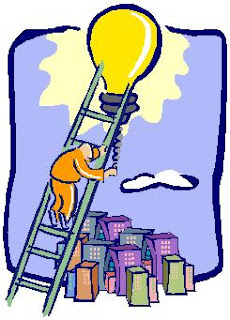 I reckon that the old axiom, 'Knowledge is Power', often attributed to the philosopher Sir Francis Bacon, is gradually becoming a relic of the 20th century.

We all know that ideas come from individual minds, or rather, knowledge is stored tacitly & implicitly in our heads. Knowledge is thus expressed as power, which in reality, is only potential power. [Please read my earlier post in the 'Optimum Performance Technologies' weblog.]

Interestingly, from an organisational standpoint, I understand that knowledge often implies the maintenance of control, & knowledge is often confined to the managerial & senior levels to keep up with "silo mentalities".

However, in today's rapidly-changing world, & with globalisation & networking, productivity is far more important that what you know inside your head.

Fueled by what we now have readily accepted as the knowledge economy, & powered by the Internet, massive streams of data, information & even people move rapidly across the globe, crossing many international boundaries, multi-cultural barriers & disparate time zones to meet & anticipate shifting global market needs, among other things.

Hence, with the ongoing knowledge economy, where ideas & creativity are central, 'Knowledge Shared is Power Squared', is now the in-thing. The new axiom for the 21st century, so to speak.

In this respect, knowledge emphasises the use of project teams or consortiums, plus the diversity of people & perspectives, to achieve better & more balanced decision making. That is, in essence, to share knowledge & empower cooperative learning.

I really don't know who has actually coined that term as I could not trace its origins.

There are, however, some notable indications that the well-known knowledge management experts, Thomas Davenport & Lawrence Prusak, who had argued that "useful information flow depends on people, not technology" in the nineties could have been the progenitors, at least in conceptual terms.

Nonetheless, I have managed to locate the term 'Knowledge Shared is Power Squared' in the wonderful book, 'Organisational Survival in the New World: The Intelligent Complex Adaptive System', by David & Alex Bennet of the Mountain Quest Institute, a research, retreat & learning center "nurturing human organisational worth".

"Knowledge is like a candle flame: sharing it with others (lighting their candles) does not diminish one's own knowledge but increases the light for all to see."

is really great, as it truly captures the essence of 'Knowledge Shared is Power Squared'.

According to him, "knowledge sharing facilitates the creation of even better ideas.

Knowledge is one of those rare things you can give away & still have.

As knowledge is shared & through reciprocal sharing, innovation springs into being. This sharing relationship must be built on a foundation of trust."

In the same vein, I have also found this great comparison from knowledge activist Euan Semple in his weblog:

"Knowledge is like money - if it's not going anywhere, it's not worth anything".

Dilip & I fully embrace the 'Knowledge Shared is Power Squared' philosophy, which explains why we have gotten together to work on projects.

Each of us has always come to an intellectual pow-wow with a handful of cursory ideas, but each of us, during the course of what Dilip calls "junction dynamics", find ourselves grasping with a whole array of fascinating hybrid ideas.

For example, as a simple case in point:

With his superb artistic skills, Dilip has created his 'lifescapes' as powerful visual planning tools for adult professionals.

During the course of one or two of our recent meetings, usually at my place, I have helped him, by exploring together, & also drawing upon my extensive experiences in school projects, to make appropriate graphic & textual changes, & further combining with traditional journalist's questions, to make his original 'lifescapes' more palatable as practical visual planning tools for teens & kids in the schools.

"Two Heads are better than One", as the adage goes.

As a matter of fact, our 'Braindancing Smorgasbord' is a physical manifestation of our planned knowledge sharing.

By the way, David & Alex Bennet have elegantly outlined the following important factors, which help to sustain the 'Knowledge Shared is Power Squared' philosophy:

i) interdependency - both taking responsibility for nurturing & sustaining the relationship;

ii) trust - based on integrity & consistency over time e.g. saying what you mean & following through what you say;

iii) a common framework - based on a common language, shared values or shared vision;

iv) openness - based on willingness to share & is directly related to trust; it contributes to a spread of trust & cooperation;

v) flow - a relationship cannot exist without interaction, without the flow of information & ideas;

[Here's the link to an interesting article, from which the foregoing has been extracted, by Alex Bennet.]
Posted by Say Keng LEE, KNOWLEDGE ADVENTURER AND TECHNOLOGY EXPLORER at 2/21/2009 07:15:00 AM