THE CREATIVE SEQUENCE: 'The Mother of All Wealth Building', as envisioned by Dilip Mukerjea 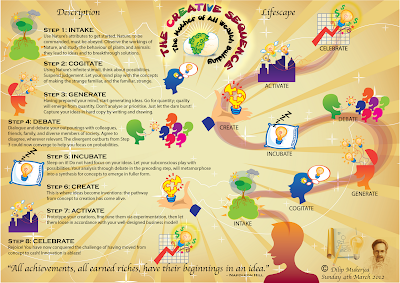 What braindancing masetro has done here, as shown in the foregoing, is a consolidated splashmap of the two features on one single page.

Also, following the ongoing evolution of his consulting work in recent years, the creative thinking process has now taken centrepiece in the whole concept of wealth building.

As Napoleon Hill,  author of the cult classics,  'Law of Success' and 'Think and Grow Rich', has so aptly put it:

"All achievements, all earned riches, have their beginnings in an idea."

and, in a nut shell, creative thinking is thus, in fact, the "Mother of All Wealth Building".

To recap what I had mentioned earlier in this weblog, money in your hands is essentially a function of the creative thinking process.

To put it bluntly, if you want to put money in your hands, change your thinking. As a matter of fact, I believed this is precisely the stance taken by cash flow guru Robert Kiyosaki.

As illustrated in the splashmap, the Creative Sequence, has 8 important stages in the thinking process, and the braindancing maestro has already outlined the salients aspects of each stage:

What I want to do in this post, as well as subsequent posts, is to build on and amplify some of the salient aspects, as follows:

We are sentient beings, and live in a luxury world of sensory impressions - sights, sounds, smells, tastes, etc. - which form the basis of our productive thoughts.

Much of the discoveries and inventions of today have their origins in pedestrian observations. That's to say opportunities are in fact everywhere, but the crux of the matter is whether we see them as they are.

That's why I have always maintained that perceptual sensitivity to the world at large is a very important skill for all of us to acquire and develop in order to thrive in today's rapidly-changing world.

Interestingly, even the great Renaissance maestro Leonardo da vinci (1452-1519), had talked about it many many years ago, since his power of observation was legendary:

"... for the development of a complete mind... develop your senses, especially learn how to see... "

"Everyone is surrounded by opportunities. But they only exist once they have been seen. And they will only be seen if they are looked for."

"The reasons that many opportunities pass us by is a perceptual one - we do not recognise an opportunity for what it is. An opportunity exists only when we see it."

He has offered the following expert advice, but stopped short of detailed elaboration:

1) Decide to spend some time and effort in a deliberate and systematic search for opportunities;

2) Use a scan approach which allow you to broaden the direction of search instead of being too eager to pursue one direction in depth;

3) When something comes into your view, make an effort to look at it in many different ways;

[My recommendations: Herbert Leff’s ‘Playful Perception: Choosing How to Experience Your World’ is a good book to explore this perspective, where as ‘The Private Eye: A Guide to Developing the Interdisciplinary Mind’ by Kerry Ruef, is worthwhile, too.]

4) Spend some time on a deliberate search for benefits in a situation instead of always expecting the benefits to be self-evident;

[My recommendations: entrepreneur Art Turock's 'Invent Business Opportunities No One Else Can Imagine', shares many interesting as well as refreshing insights, especially from the standpoint of business development.]

Nonetheless, Dr Edward de bono has zero-ed in on what he has termed as "idea-sensitive areas", as follows:

- further development areas, where improvement is an ongoing process;

- emotional target areas, based on emotional feeling or hunch;

- general, where one can start thinking about an area with the view of using the thinking as lead to an opportunity;

Dilip is absolutely right on the ball when he singles out the infinite stimuli coming from Mother Nature, from which we can analyse her attributes, especially from the standpoint of creative thinking to spark off ideas and insights

It is true that Mother Nature has always been modern technology's first teacher.

Man's continuing conquest of powered flight today with the latest Airbus 380 and Boeing 777 has its origins from the study of birds in natural flight. So, are today's nuclear submarines that can submerge below the Polar cap for extended periods. Thanks to deep-sea marine animals.

Likewise, the basic stuff that goes into silicon chips comes from sand.

Without Alexander Graham Bell's early exposure to understanding how the human ear works, we probably will still be using smoke signals for communications.

Even architect F Buckminster Fuller, widely known as planet earth's friendly genius, owed his design and development of the geodesic domes, which have to date given shelter to millions across the globe, to the eye of the common house-fly.

The tunnelling machines, which were used to build the underground network for Singapore's Mass Rapid Transit System, owed its pioneering design and development to Sir  Marc Isambard Brunel (1769-1849), a French-born engineer who had settled in the United Kingdom.

Interestingly, Brunel had found the inspiration for his tunnelling shield from observing the tunnelling habits of the ship worm, "teredo navalis", a pest that ate the wooden hulls of ships.