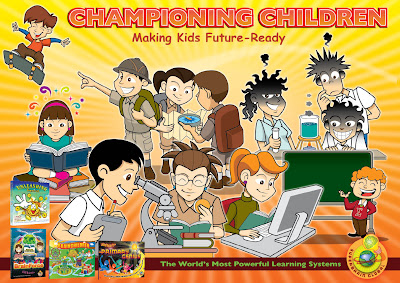 This is my favourite topic, also my strategic forte ~ vision-building.

My real-world experiential understanding of vision-building came from a memorable, though painful, personal encounter from my former "big boss" ~ the late Tan Sri [that's the Malaysian equivalent of "Sir"] Eric Chia, Chairman & CEO of the United Motor Works (UMW) Group during the early eighties, when I had joined them as a manager.

[Readers are welcome to pop into my 'Optimum Performance Technologies' weblog to read about that encounter.]

My working knowledge was subsequently expanded & fine-tuned when I came across the splendid work of futurist/film-maker/author Joel Arthur Barker during the early nineties, especially his acclaimed 'Power of Vision' video-based training program.

As a matter of fact, one of Barker's wise axioms often reverberates in my head, whenever I talk about vision building:

"Vision without action, is but a dream; action without vision just passes the time; vision with action can change the world."

Collectively, they drove home the vital point about the power of vision-building:

Nations, organisations, individuals as well as students with vision are powerfully enabled. Those without vision are at risk.

Just as King Solomon had once said, as reported in the Bible of the Old Testament: "Where there is no vision, the people perish."

In the case of students, Dr Benjamin Singer made these startling revelations, back in the sixties:

i) children with vision out-performed their assets;

ii) successful students had one thing in common: a profound belief in their future & their ability in their own efforts to shape it.

Likewise, based on the pioneering research work of Jim Collins & Jerry Porras, visionary organisations out-performed their assets, too.

As a nation, Singapore is a great example! Thanks to the compelling vision - & the strategic foresight - of MM Lee Kuan Yew & his colleagues as well as ministerial stalwarts, Goh Keng Swee, S Rajaratnam, Toh Chin Chye, Eddie Barker, etc., just to name a few of them.

A vision is just a simple idea or mental picture you have in your head about where you want to be in the future.

A clear vision helps one to pursue dreams & achieve goals.

A well-defined vision helps one to focus on the end-state of who you want to be, what you want to have &/or do, & where you want to go.

Generally, it can be applied in two different ways:

1) Inspiration ~ to inspire youself to follow your bliss & pursue your dreams;

2) Anticipation ~ to foresee the changes & improvements you want to have in the future;

When you can envision a future that is better, happier & more productive, you are more likely to make the necessary changes & improvements for yourself to attain that end-state in the future.

To Dr Karl Pribram of Stanford University, who works with sports champions, vision is akin to his "image of achievement".

By the way, what the difference between "vision building" & "goal setting"?

Operationally, they are complementary. A quick one... This is how I look at them:

At this juncture, I like to share an inspiring quote, to sum up "vision building" & "goal setting":

"If you have a vision and you find that someone doesn't share that vision, you either change the vision or change the people you share it with. We learn and grow one goal at a time. But to set meaningful goals, we need imaginative insight or vision."

In essence, vision-building is a relatively easy endeavour, if you know how to go about it.

In fact, Dilip will share valuable lessons from the corporate world as well as educational arenas, besides coaching you on how to look at your own life strategically in long-range time-horizons, & also, how to do your own 'lifescape' using his proprietary 'lifescaping' methodology.

[For more information about the series of new programs under 'The House of Creative Brains', please get in touch with Ms. Faye Yeoh via her email faye_yeoh@yahoo.com]
Posted by Say Keng LEE, KNOWLEDGE ADVENTURER AND TECHNOLOGY EXPLORER at 11/22/2010 07:39:00 AM