I have more or less settled down in my relocation exercise to Ho Chi Minh City, especially with the establishment of my normal as well as new daily routines.

Besides my normal routines of morning exercising in a body-building gym from Mondays to Fridays with my wife [Readers can go to my new 'Bonjour Vietnam, Here I Come!' weblog to read about it], I have just started to resume writing my blogposts. 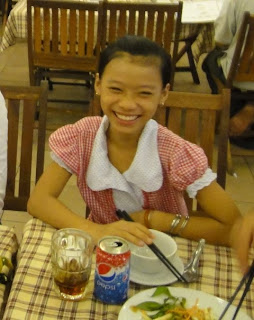 Among the many new daily routines, I am now spending some time coaching one my wife's young nieces, nicknamed 'Thao', 11 years old, in building up her verbal facility in the English Language, as she is likely to move to America in about a year's time. She is currently staying with us, & she is also attending private English Language tuition classes six times a week in a nearby center.

I am also providing supplementary English Language coaching to one of my wife's young nephews, together with our own adopted young son, both in their early teens, who have recently moved from the country-side into the city to attend a good government school. They are both staying with us, & are currently having private tuition at home with tutors to catch up with the new academic environment in the city.

[The snapshot here shows the two boys hanging out with their Maths tuition teacher (in the centre).] 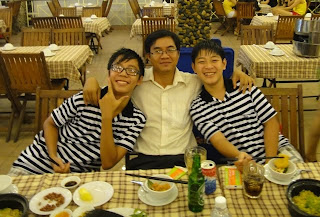 This year is apparently a very critical year for both of them in school.

More interestingly, I am also now coaching another young niece of my wife in building up her command of the Chinese Language. She is Valarie, 13 years old, although she is nicknamed "Pea" at home. She will be going to Singapore to attend secondary school there just after the new year.

[With her age, by comparison with her other siblings & relatives, she already has a reasonably good command of the English Language. In fact, I had told her mother to buy her some English story books as well as a good English dictionary from Collins to guide her reading. While she was visiting me in Singapore for almost a month in August this year, I had guided her in reading the popular '365 Bedtime Stories'.]

In that way, I have more or less two months to brush up her rudimentary understanding, so to speak, of the Chinese Language.

Chinese Language is something I had learned during the sixties, while I was still in prim 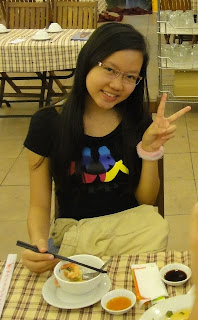 As a result of my early bilingual exposure, speaking the Chinese Language is no big deal for me, as I often converse in this language with my three older sisters, & one older brother, who are all Chinese-educated. I also converse in Mandarin with my wife, May.

However, I realised that teaching the Chinese Language is a totally different ball game for me.

Fortunately, I have the vast Internet resources at my complete disposal, from which I am able to collate & synthesise a quick-learning start-up curriculum - it's actually a crash course - to teach Valarie how to read, speak & write the language.

The whole exploration & coaching experience has turned out to be an exciting - intellectually stimulating, too - endeavour for me.

It sort of wakes up my brain, in a matter of speaking! So, the many empirical research findings about new language learning were really on the ball.

Using the many podcasts & related .pdf documents from www.chinesepod.com, & with additional materials from www.clearchinese.com, I have built what I needed quickly & meaningfully for Valarie to get a good introduction.

Frankly speaking, the whole endeavour is a relearning experience for me, too. In the process, I have realised that I also get to fine-tune my own understanding - & mastery - of the language.

During my student days of the sixties, I was exposed only to the traditional Chinese format.

Today, students are learning the simplified format, which, in a nut shell, has reduced many of the Chinese character's basic stokes in terms of writing.

That's to say, I am not so familair with the simplified format, hence the need for my own relearning.

So, you can imagine the agitation of my billions of neurons in the brain!

Nonetheless, I have managed to sail through smoothly, as Valarie feels very proud that I have not lost touch with the Chinese Language. She thinks I am a great coach.

Since I did not have any formal Chinese Language teaching experience, I just follow my creativity flow & gut instincts, when it comes to coaching someone on language learning.

With the help of flash cards, which we are building everday to suit everyday situations, I have taught her how to expand her Chinese Language vocabulary.

With each flash card, containing a word or a phrase, I get her to think incessantly of all the possible variations e.g. synonyms, antonyms, formal & informal terms, colloquial terms, etc., as she sees the word or phrase.

On the other hand, in guiding her in enhancing the understanding of - & recalling - the "radicals" (the basic strokes; by the way, there are some 200 in everyday usage, although I will show her only 60, based on the ClearChinese materials), I often get her to imagine or visualise the influence of Mother Nature as she sees each of them, e.g. the "sun" character in Chinese actually looks like the sun, & how each "radical" fits into a compound word, e.g. "morning", which is essentially a Chinese ideograph.

Drawing lessons from my engineering background, I am able to craft a proper balance of reading, speaking & writing opportunities for Valarie to practise. Let's see how it turns out in two months' time.

I think the most important fact is that Valarie is extremely interested in learning the new language. That itself is an overriding plus factor in her favour.

As for me, it's really a cool fun exercise, besides keeping my brain fired up!
Posted by Say Keng LEE, KNOWLEDGE ADVENTURER AND TECHNOLOGY EXPLORER at 10/30/2010 09:06:00 AM

great piece Teacher Say Keng, thanks for the sharing and very cool what you are doing!
and living in HCMC sounds charming.
cheers from bangkok, doug