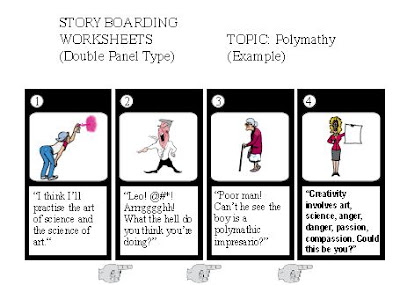 The concept of Storyboarding emerged from the fertile brain of Walt Disney. There are several ways to storyboard.

This example demonstrates a double-panel method, where a one-to-one relationship is established between imagery and text. Each individual double-panel can be used to sequentially build up a story or theme. The applications are manifold, some of which include:

■ outlining the theme of a novel;

■ creative problem solving in business or in personal life;

There can be as many panels as you wish, each custommade for an individual or an organisation.

Sizes can vary with application requirements and imagery should be in colour, if possible. This enhances idea-generation, and makes the panels look attractive.

The numbering of the panels is done only after the final sorting process has been completed.

The advantage of loose panels is the freedom to change sequences; such independence unleashes creativity, with ideas often emerging serendipitously.

[To be continued in the Next Post. Excerpted from 'Surfing the Intellect: Building Intellectual Capital for a Knowledge Economy', by Dilip Mukerjea. All images in this post are the intellectual property of Dilip Mukerjea.]
Posted by Say Keng LEE, KNOWLEDGE ADVENTURER AND TECHNOLOGY EXPLORER at 8/01/2009 08:48:00 AM