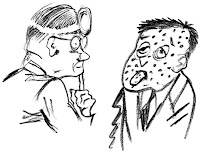 The Measles Chart is a simple map with a rash on sections of it. It provides a visual means of inspiring a breakthrough during problem-solving operations. The frequency and location of errors are inscribed on a schematic drawing of the problem. This is used as a starting point. Provided the errors have been located correctly, a solution is often readily visible.

This technique can be comfortably applied to a product, process, service, and even to people in some instances. It uses provoked creativity and frequently works very effectively when applied to short time frames.

STEP 1 : Define the problem. What is the product, process, service, or person under scrutiny?

STEP 2 : Draw a simple diagram of the item under consideration.

STEP 3 : Plot the frequency and location of errors on the diagram.

STEP 4 : Analyse the final picture. Evaluate your findings and arrive at a conclusion.

Note: The problems or errors may be of diverse types. You could plot them as unique shapes and with specific colour codes. These markings could represent the diversity as well as the degree of severity in the errors.

You need not make the chart very detailed. Keep it simple so that there are no problems with visibility.

Distribute copies of the chart to the team of troubleshooters; additionally, you could also exhibit an enlarged copy of the chart for general display ~ ideas are often born in the minds of the most unlikely sources. Encourage democratic participation in the creative process wherever possible. 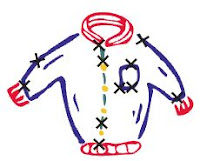 In this example, the locations that need repair or re-design are clearly marked – Direct Insight, unlike Example 2, which calls for Indirect Insight. 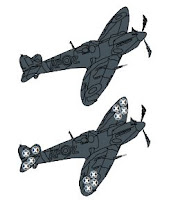 During World War II, Allied bombers were deployed on the European continent. However, not all of them returned from their raids.

Step 2 : Draw a simple diagram of the item being considered.

Step 3 : Plot the frequency and location of errors on the diagram. This was done on every plane that returned to base.

Step 4 : Analyse the final picture. Evaluate your findings and arrive at a conclusion.

The initial gut reaction was to add armour reinforcement to those locations with bullet holes… essentially patching up the holes in the wings and tail. No success. However, a little creative thought was applied to the problem… Armour was added to those areas where there were no bullet holes.

The Measles Chart is actually one of the older quality tools, like Fishbone Diagram. In the quality movement, it is sometimes known also by different names, like 'Concentration Diagram', 'Scatter Graph', or 'Defect by Location Check Sheet'.

Nonetheless, its primary intent is to graphically illustrate any pattern as to the location & frequency of occurrence of defects on the product geometry.

Tactically, the potency of this quality tool comes from the questioning:

Apparently, the Measles Chart has other uses too.

I have seen, on the net in the form of a news report, a large map of Iraq, with all the planned, work-in-progress & completed infrastructural projects with dots, triangles, squares & diamonds, all colour coded appropriately, to show the reconstruction of the country by US forces, thus giving the impression that the country has developed a bad case of measles!

[Please refer to my earlier post, entitled 'The Ultimate Fighting Weapon', which also illustrates an usage example of the Measles Chart from ancient history.]
Posted by Say Keng LEE, KNOWLEDGE ADVENTURER AND TECHNOLOGY EXPLORER at 4/06/2009 09:03:00 AM