"Everything is connected to everything else."

To be frank, the first time I had encountered this profound statement from Leonardo da vinci, that was way back into the late seventies or maybe the early eighties, I sort of knew it only intellectually, but did not truly understand it.

That's to say, to paraphrase personal transformation guru Harry Palmer, I had acquired only the "word experience", but not yet the "world experience".

It was probably only towards the end of the eighties that I had a good grasp of its true meaning, especially after I had embarked on a journey to explore learning & creativity as lifelong pursuits, followed by my small entrepreneurial ventures during the early nineties (bookstore, newsletter publishing, & consulting).

Around that time, I had acquired the fascinating book, 'Connections' [followed later by 'The Pinball Effect'] as well as the related wonderful video productions, by scholar & documentary producer James Burke.

He had brilliantly traced the course of many technological innovations from ancient times to the present. In fact, he looked in particular at 8 of them, which maybe most influential in structuring our futures:

- the computer;
- the production line;
- telecommunications;
- the airplane;
- the atomic bomb,
- plastics;
- the guided rocket;
- television;

According to him, each of the 8 was part of a family of similar devices, & was the result of a sequence of closely related events extending from the ancient world until the present day.

In a nut shell, about 12,000 years of history had shown that every person, circumstance, event or invention related in some way to every other.

With my own personal exploration of the field of creativity & innovation, first as a student, then researcher, & finally as a strategy consultant, working with real-world clients, my understanding & knowledge of the foregoing statement went up a couple of notches.

I like to use the following apt quotes to exemplify:

"The crux of creativity resides in the ability to manufacture variations on a theme. If you look at the history of science, for instance, you will see that every idea is built upon a thousand related ideas. Careful analysis leads one to see that what we choose to call a new theme is itself always some sort of variation, on a deeper level, of previous themes."

~ Douglas Hofstadter, quoted in 'Essence of Creativity' by Steven Kim;

"The essence of creation - in all endeavours - is chance connections between ideas & facts that were previously segregated. Entrepreneurship is the direct by-product of chance, of convoluted connections among ideas, needs & people."

Around the same time, as part of my strategy consulting, in conjunction with my small bookstore, aptly called 'The Brain Resource', I had also indulged in training development & coaching both professionals, managers & entrepreneurs as well as school going kids & teens.

In building up my reference & coaching resources, especially for the kids, I had stumbled upon a wonderful picture book, among many others, by Dr Seuss under his pseudonym, Rosetta Stone: 'Because a Little Bug Went Ka-Choo!'.

In a nut shell: A little bug sneezed & each consequence led to a bigger one, creating in the end total chaos in town, & all because a little bug went ka-choo!

It was certainly a fun way to introduce to the kids the idea that even our smallest actions could have important consequences.

Nonetheless, for me, it was also a brilliant encapsulation of Chaos Theory, which beautifully illustrated the fact that a small event could trigger larger unforeseen events. 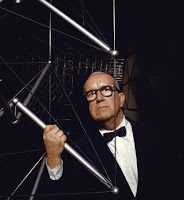 ad also meanwhile stumbled upon the Dymaxion Map, or better known as the Fuller Projection, from R Buckminister Fuller, or Bucky as he was affectionately known. He was the man who had created the Geodesic Dome.

Imagine my real shock of realising what I had learned earlier in school, especially with the most widely used Mercator Map, was wrong.

In the Mercator Map, Greenland was shown 3 times its normal size; Antarctica was splayed across the full length of the bottom of the map as a huge long piece of land.

That's to say, the map was badly distorted.

In the case of the Fuller Projection, patented in 1946, the map arrangement puts the North Pole as the centre, thus showing a contiguous land mass & retaining most of the relative proportional integrity of the global map.

That's to say, the map has no or minimal distortion.

In reality, Bucky saw all people on planet earth eventually becoming a one-town world or one-world island in a one-world ocean.

I then knew exactly why Bucky had designated our planet earth as Spaceship Earth. We are all in it together as crew members.

In other words, we are all connected.

Come to think of it, at a deeper level, whenever we find or learn something new in our environment for the first time in our life, doesn't our brain goes into a quick search mode at lightning speed to zip through our entire lifetime inventory of memory traces in order to create a match, so to speak, as if everything in life we have gone through is connected or resonated in some way?
Posted by Say Keng LEE, KNOWLEDGE ADVENTURER AND TECHNOLOGY EXPLORER at 4/07/2009 09:04:00 AM