Yesterday morning, while my wife went weekend shopping with her girl friend, I spent 'pow-wow' time with my good friend, Dilip, at my place in Jurong West.

After our usual 'pow-wow' routine, it was already mid-afternoon, & we had adjourned for a quick lunch at my neighbourhood coffee-shop.

Over lunch, we talked at length about the issue of some business professionals who seemingly had tremendous problems in seeing possibilities, especially with regard to intangible assets like intellectual thoughtware.

One particular individual, a woman professional, stood out during our discussion.

Self-proclaimed as a "business architect" & holding a Masters in Commerce, & also having worked for a large international bank before, she eventually admitted to us that she was totally lost as to understanding the business of intangible assets. That was even after we had purposely drew up specific flow diagrams for her, following several face-to-face deliberations.

Then it dawned on us about what we had learned from creativity guru Edward de bono.

I will endeavour to explain the above phenomenon from my personal perspective, based on my own understanding of de bono's great work.

Surprisingly, in today's Knowledge Economy, some people, according to our personal encounters, still suffer from Rock Logic.

They are stuck in a part-focused or piece-focused perspective. More appropriately, they can only view the world from a singular, static perspective. They are more comfortable with well-defined boundaries & traditional dichotomies.

That's to say, they are unable to connect things or events, like a system.

For me, the key questions that must come to mind when thinking in a systemic manner are:

- where did THIS part come from?

- what or where will THIS part lead to?

So, from a systems perspective, the sequence of questions may be represented by the connection or flow of the parts (things or events) as shown below:

The foregoing illustrative equation, so to speak, is the essence of Water Logic.

For people who embrace or are keenly aware of Water Logic, they often view the world in a flow pattern.

To paraphrase de bono, they have a multiplicity of perspectives. They are very comfortable in toying with numerous raw ideas, & shaping them into viable prospects.

To put it in another way, sad to say, some people just don't know how to get unstuck & move to the NEXT LEVEL, let alone to take the NEXT STEPS, because they just can't seem to see where things or events are moving or leading to.

That's why Dilip & I had put our heads together over several days of intensive 'pow-wow' - at my place a couple of weeks back - to create an extensive repertoire of business ideas & operating outlays - I like to call it 'possibility coagulation' - to help others to convert intangible assets into potential 'brick & mortar' businesses, as shown in the two slides appended below. 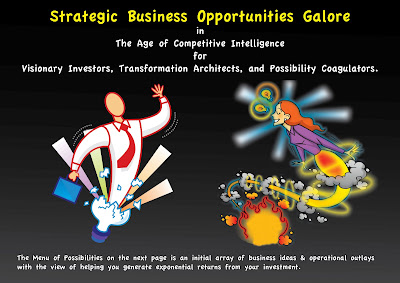 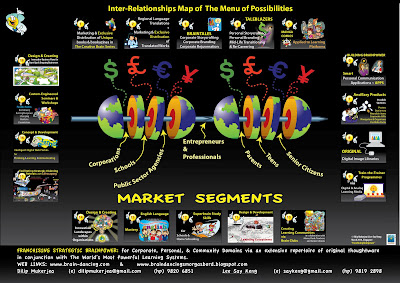 [By the way, Edward de bono offers an excellent exposition on the distinctions between Rock Logic & Water Logic. Here's the link to it.]
Posted by Say Keng LEE, KNOWLEDGE ADVENTURER AND TECHNOLOGY EXPLORER at 3/28/2010 10:04:00 AM