WHY IS ASIA ON THE EDGE? by DILIP MUKERJEA

Edges form, frame, and fashion, concepts into creations. They establish borders, boundaries, and barriers that impact our lives, and livelihoods. Sometimes they confuse, or clarify, issues that determine destinies…of peoples, and of nations. Edges emerge from movement, pause for a spell, and move on into fresh incarnations.

The edges that define continents are formed from the exertions of our planet rolling in space at 1,000 miles per minute. Asia is a continent created from such vibrancy, and …from the clashes of vigorous and vivacious cultures that are still evolving.

The question “Why is Asia on the Edge?” sounds complete, yet remains open, a reflection of the promises and possibilities of “infinity,” from the French in-fini, meaning unfinished, or incomplete. Asia is unfinished and incomplete, ergo, on the edge. Yet there is more…

Asia, in some senses, has always been ‘on edge’ but ‘on the edge’? I look upon ‘the edge’ as the contour lines that enclose and exclude. A mélange of tribes evolved, often with tough soul-stealing rigour, and spread out within vistas of wayfaring. They soon established their separate, distinct identities expressed in an expense of time and an expanse of spirit. The edge, for Asia, has moved on from being a dividing line between the Occident and the Orient; it has become a metaphor for Asia awakening to, no, breaking through…! What? Through a marmoreal darkness, into a new dawn, building to a succulent crescendo of emotion and passion in terms of its place in the forefront of modern civilisation. Driven by entelechy, that dynamic restlessness working purposefully towards a goal reflective of Asia’s primordial identity.

But what about Asia being on the edge of the ledge of knowledge? After all, we have been transitioning through the ‘knowledge economy’. The question is, in several senses, irrelevant, nor Asia’s repository of venerable wisdom has much to offer the corporate ecosystems of the Third Millennium. Yet, in numerous instances, amnesia has set in, and many Asian have no awareness of their heritage of wisdom. Thus, the best that can happen for now is to be poised on the edge, a dynamic edge, where innovations erupt with unstoppable ebullience. This is where learning happens…and Asia is learning, burning with learning.

The merging of Asia ancient and Asia contemporary is also an edge worth considering. It is here that we see the art of science and the science of art expressed with an eloquence that has a uniquely pulsating richness. Admittedly, it is the bane and the balm of individual perception that “objective” reality is seen through the filter of each person’s temperament. But there is no denying the brilliance and beauty that bursts forth from just the energy expended in what I see as ‘Asia Awakening’.

Integrating present intention and past wisdom will kindle a more synthesised awareness which begins in wonder and ends with wisdom…a fresh wisdom, embedded with elements to transform the world, and metamorphose it from hope to fulfillment. This would be Asia on the edge of what was and what can be, working towards a grand epiphany!

Asia is also on the edge … of fragmentation, but this could be the process of creative destruction, and reconstruction: a mosaic breaks up space into sharply distinctive pieces — and yet produces a coherent image. This too is Asia on the edge.

Every child is born with the desire to re-create the world on his or her own terms. For the child, magic and art are matters of mirth and merriment. Art translates curiosity and wonder into mastery over the environment. Asia is such a child, one created anew, in the wake of numerous past incarnations… on such an edge is Asia poised, set to articulate its energy and information into matter that takes on fresh forms and functions. 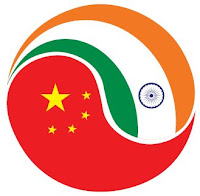 Art merging with science, with the same ingenuity of atoms that formed stars and provided the source for their prodigious energy. Stars joined together to form galaxies and galaxies conglomerated into clusters. I see this as a lustrous metaphor of Asians on the edge of ideas…ideAsians!

As two nations representing the Asian metaphor, China and India are also on the edge in their quest for the best. They compete, and collaborate, with one another, as can be seen in the imagery here. The Chinese and Indian flag shapes are contrasted and unified, at the same time. Nothing could be more different, and nothing could be more similar. This is the symbolic essence of Dialectic Thinking, which has 3 main propositions:

The Interdependence of Opposites

The Interpenetration of Opposites

The Unity of Opposites

Thus, Asia on the Edge is also reflective of

Asia is all of these: being, nothingness, becoming, and more…and it can only be so…on the edge!

On the next page is a taste of how ideas drift in from the edge and coalesce at centres of innovation. This is also reflective of how Asia being on the edge can inspire a global commonwealth of effort: to generate ideas, and regenerate communities!

IDEAS ON THE EDGE

Most ideas come from the edges. They can be refined as edgy ideas, or left to keep travelling ‘inwards’. Those that coalesce to become the central zone of focus,  (the large light bulb above) can be used as a stimulus to trigger more ideas.

AN EXAMPLE OF EDGE STREAMING 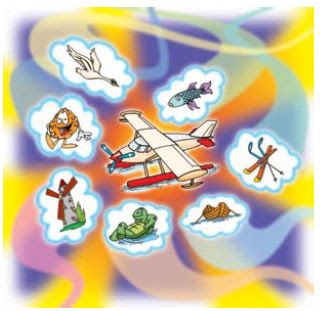 Inventing a Sea Plane: As you can see from the garland of images forming the edges of the outside circle, the sea plane is a composite of edgy ideas that swoosh in towards the centre. Each of these edgy ideas is also a synthesis of other edgy ideas. This is how the human brain propels evolution.


The central image thus formed is now ready to become the starting point of a Mind Map. It has become our zone of focus, from which a spray of additional ideas emerge. This starting point has been created from millions of other micro-starting points. The micro-zones of foci drift across our minds, inviting us to use them in our night- and daydreams. Most keep drifting. To catch them, you need a purpose, an intention, which has a force of its own. Then, “automagically,” like individual bulbs in a chandellier,
Posted by Say Keng LEE, KNOWLEDGE ADVENTURER AND TECHNOLOGY EXPLORER at 6/23/2011 11:46:00 AM

Email ThisBlogThis!Share to TwitterShare to FacebookShare to Pinterest
Labels: Asia on the Edge, Dilip Mukerjea