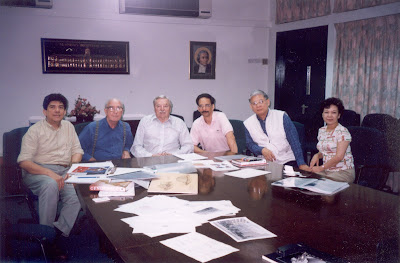 For Dilip & me, it serves aptly as our personal tribute to two great minds, Brother Joseph McNally & Bob Lewis when they met at the former Mountbatten Campus (at Goodman Road) of the Lasalle College of the Arts around the very late nineties or early 21st century to discuss one of Bob's pet projects, 'The Museum of the Brain'.

[In the foregoing group snapshot: Immediately on Dilip's right was Bob Lewis, followed by Brother Joseph McNally. The guy in a white vest is yours truly. On my immediate left was my late wife Catherine. The remaining guy was a senior staff member of LASALLE.]

In 1984, he set up a small arts education center, with his own personal funds, at a time when Singapore was not ready at all for the creative arts industry.

As an educator & an artist for most of his life, he saw his baby as a place to nurture creative excellence in painting, ceramics, sculpture & music.

More information about the LASALLE College of the Arts &/or Brother Joe can be found at this link.

One of his pet projects which didn't take off was a museum about the human brain, actually shaped like a structure of the human brain, that would illustrate its inner workings. He called it 'The Museum of the Brain'.

Dilip has illustrated several pictorial aspects of 'The Museum of the Brain' in his wonderful book, 'Surfing the Intellect'.

More information about Bob Lewis can be found at these two links:

I first met the colourful Bob Lewis in the nineties. Dilip met him later through Brother Joe. Details of my initial encounter with him can be found at my 'Optimum Performance Technologies' weblog.

Both Dilip & I had picked up some interesting & unique perspectives from these two gentlemen, especially in terms of creating a learning ecosystem (including learning safaris) as well as designing the proposed curriculum for the Brainaissance University, one of Dilip's newest pet projects.

Suffice to say, the foregoing group snapshot brings back sweet memories of our meeting with two great minds!
Posted by Say Keng LEE, KNOWLEDGE ADVENTURER AND TECHNOLOGY EXPLORER at 8/26/2010 06:26:00 AM

Email ThisBlogThis!Share to TwitterShare to FacebookShare to Pinterest
Labels: Brother Joseph McNally, Robert "Bob" Lewis, The Museum of the Brain