GARRY KASPAROV IS COMING TO TOWN! 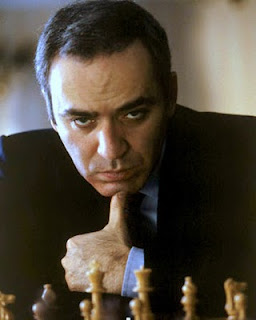 I read in today's issue of the Straits Times, the Russian Grandmaster Garry Kasparov will be in Singapore on 15th August 2010 (Sunday) to play in exhibition blitz chess matches against two of Singapore’s top chess players ~ plus, a battle against thirty local chess players of different age groups in simultaneous chess matches.

The one-day event is jointly organized by Conrad Centennial Singapore, Serangoon Gardens Country Club, Thomson Community Club and the "Chess is for Everybody in Singapore" movement.

This is apparently the first ever visit by a living chess legend, Garry Kasparov, to Singapore.

I have written quite a number of posts about Garry Kasparov in the 'OPTIMUM PERFORMANCE TECHNOLOGIES' webog, especially my fascination for his super brainprower when it comes to using his brain.

By the way, he is also the author of 'How Life Imitates Chess: Making the Right Moves, from the Board to the Boardroom', which contains autobiographical anecdotes about his face-off against IBM's Deep Blue computer.

Additionally, in his book, he shows us how the tools that made him a world chess champion can make us more successful in business & in life: Preparation, practice, evaluation, strategy, tactics, intuition, creativity, commitment, & spontaneity.
Posted by Say Keng LEE, KNOWLEDGE ADVENTURER AND TECHNOLOGY EXPLORER at 8/05/2010 12:24:00 PM