I have found the following interesting anecdotes from the book, 'A Whole New Mind: Why Right-Brainers Will Rule the Future', by researcher Daniel Pink, which gives a quick understanding about a fundamental aspect of creativity:

In the 1970's, Hershey Food Corp ran a series of goofy TV commercials that inadvertently contained a crucial lesson in creativity.

In the ads, a person walks along dreamily while munching a chocolate bar. Someone else, equally oblivious, strolling about while eating peanut butter. The two collided.

"Hey, you got peanut butter on my chocolate," the first person complained.

"You got chocolate on my peanut butter," the other person replied.

Each person sampled the result. To their surprise, they discovered they had created a masterpiece: Reese's Peanut Butter Cups.

Sometimes, the most powerful ideas come from simply combining two existing ideas nobody else would have thought to unite.

Take John Fabel, an avid cross country skier. He loved the sport, but his backpack straps always bruised his shoulders. One day on a trip to New York, he passed by the Brooklyn Bridge - & saw the solution to his problem.

Fabel combined the structure of a suspension bridge with the components of a traditional backpack - & invented a new, easy-to-tote, & new popular backpack called EcoTrek. 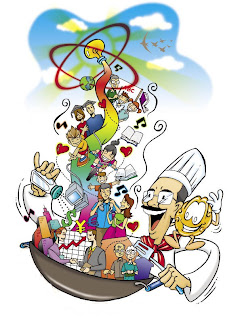 It reminds me of Arthur Koestsler's 'bisociation of matrices'.

"Creativity is fostered by information gathered from new connections; from insights gained by journeys into other disciplines."

When Singapore embarked into the designing & planning of the Mass Rapid Transit (MRT) in the early seventies or so, designers were confronted by the need to air-condition all the underground stations in light of our hot & humid climate.

One designer drew inspiration from having seen the practical usefulness of automated sliding doors at the entrances of shopping complexes & office buildings, which were air-conditioned in town.

Singapore's MRT became the first in the world to have fully air-conditioned underground stations.
Posted by Say Keng LEE, KNOWLEDGE ADVENTURER AND TECHNOLOGY EXPLORER at 3/19/2010 10:10:00 AM