THE FRINGE BENEFITS OF FAILURE, & THE IMPORTANCE OF IMAGINATION 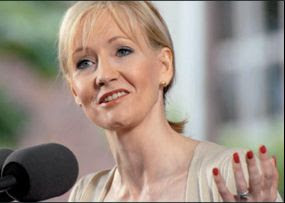 What follows is actually my extract of the Commencement Speech by J K Rowling, author of the best-selling Harry Potter book series, at the Annual Meeting of the Harvard Alumni Association in June last year.

It's entitled 'The Fringe Benefits of Failure, and the Importance of Imagination'.

The entire speech can be viewed at this link.

In a nut shell, her speech was an inspiring look into her own personal life as well as her professional success.

In her address, she has stressed the importance of imagination, not just because imagination was the vital key to her own success as an author, but because it is what enables us to create and make progress in life.

"... So why do I talk about the benefits of failure?

Simply because failure meant a stripping away of the inessential. I stopped pretending to myself that I was anything other than what I was, and began to direct all my energy into finishing the only work that mattered to me.

Had I really succeeded at anything else, I might never have found the determination to succeed in the one arena I believed I truly belonged. I was set free, because my greatest fear had been realised, and I was still alive, and...

... You might never fail on the scale I did, but some failure in life is inevitable. It is impossible to live without failing at something, unless you live so cautiously that you might as well not have lived at all – in which case, you fail by default...

... Failure gave me an inner security that I had never attained by passing examinations.

Failure taught me things about myself that I could have learned no other way...

... The knowledge that you have emerged wiser and stronger from setbacks means that you are, ever after, secure in your ability to survive. You will never truly know yourself, or the strength of your relationships, until both have been tested by adversity. Such knowledge is a true gift, for all that it is painfully won, and...

... I have learned to value imagination in a much broader sense.

Imagination is not only the uniquely human capacity to envision that which is not, and therefore the fount of all invention and innovation. In its arguably most transformative and revelatory capacity, it is the power that enables us to empathise with humans whose experiences we have never shared...

... Unlike any other creature on this planet, humans can learn and understand, without having experienced. They can think themselves into other people’s places..."
Posted by Say Keng LEE, KNOWLEDGE ADVENTURER AND TECHNOLOGY EXPLORER at 9/06/2009 04:42:00 PM