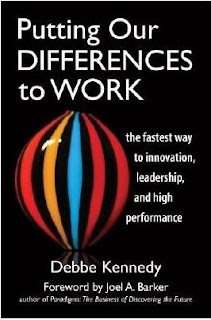 The foregoing blogpost title more or less sums up the gist of the book.

In fact, it has been extracted from the 'Foreword' by futurist/strategist Joel Arthur Barker to the book, 'Putting Our Differences to Work: The Fastest Way to Innovation, Leadership & High Performance', by Debbe Kennedy.

[Both consultants/authors have been relatively long-time collaborators.]

On the other hand, I am also familiar with the author (Debbe Kennedy)'s previous work, namely, 'Breakthrough! The Problem Solving Advantage' (1998) & 'Action Dialogues: Meaningful Conversations to Accelerate Change, (2000), as well as her complete 'Strategic Action Series' (2000) of short & snappy booklets, total six of them, comprising:

As a matter of fact, while running my own small retail outlet, aptly called 'The Brain Resource', in the Central Business District during the nineties, the nifty toolkit - 'Breakthrough!', in the form of a book/card deck/CD-ROM package - was included in my store repertoire.

I would add that the practicality & the utility of her earlier thoughtwares in the workplace actually earned her the reputation as a master problem solver.

For me, reading 'Putting Our Differences to Work' is like doing a partial refresher, because the book is almost an intellectual amalgam of all her previous works, particularly the entire section of Part 2, which replicates the 6-step iterative framework for putting diversity to work in fostering organisational change.

Before I move on further, I like to recap the preamble on the inside front flap of the book, which I thought has captured the essence of the book beautifully:

"Putting our differences to work means creating an environment where people, naturally unique & different - diverse by nature & experience - can work more effectively in ways that drive new levels of creativity, innovation, problem solving, leadership, & performance in the marketplaces, workplaces, & communities of the world."

In addition to the six-step model, with each step elaborated in a given chapter, combined with best practice stories, the rest of the book identifies the five distinctive qualities of leadership, that leaders must add to their skills portfolio - & the 16 dimensions of differences that leaders must understand - in order to make diversity an engine of success.

The book closes with a presentation on virtual gathering, involving web 2.0 technologies & other social media, which open up ever-expanding possibilities for putting diversity to work. These are included in Part 3 of the book, which also includes Joel Arthur Barker's contribution (Chapter 10 & 11), as mentioned earlier.

If readers are already familiar with the intersection of ideas, concepts & cultures, as embodied in the 'Medici Effect', proposed & authored by Frans Johansson, then readers will readily notice a relatively similar, but still interesting spin, given by Joel Arthur Barker in the two chapters.

Both authors have brilliantly asserted, with numerous illuminating examples, that by exploring the 'intersections' or 'verges', we may discover the next breakthrough ideas.

As Joel Arthur Barker puts it, to dovetail with Debbe Kennedy's principal premise of the book:

Overall, I must say that the book is a great road-map on harnessing people's rich & diverse experiences, cultures, & perspectives to attract growth & sustain innovation.

Best of all, the author is a superb tale blazer, & her writing is clear, succinct & concise, with a key-point summary at the end of each chapter, which makes reading & recap a breeze.

[Readers can access more information about the author & her work at http://www.puttingourdifferencestowork.com/, http://www.globaldialoguecenter.com/, & http://www.lscompanies.com/;]
Posted by Say Keng LEE, KNOWLEDGE ADVENTURER AND TECHNOLOGY EXPLORER at 9/15/2009 09:51:00 AM