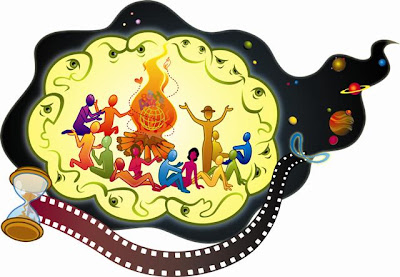 This elegant integral imagery in the form of a conceptual symbol from Dilip Mukerjea, created through his masterful combination of digitisation technology & pencil renditions, readily captures the essence of his new series of corporate seminars, designated as 'Braintales', at the Singapore Institute of Management.

The first one was successfully completed from July 21st to 22nd, 2009.

Please proceed to this link to check out the next seminar schedule, as well as to get more information, including downloading a brochure, about the seminar.

'Braintales' is just Dilip's unique way of describing the ancient art of storytelling, as well as storycrafting.

In fact, he also has another unique word for the latter, 'Taleblazers', which also happens to the the title of his book. The book is currently available in all Kinokuniya books stores.

Alternatively, you can go to his corporate website to read some excerpts from the book. Here's the link.

Even better, you can also go to read my personal review of the book in an earlier post.

In recent years, there seems to be a resurgence of interest among today's business & organisational leaders in the telling of a good tale, at a time when electronic communications are supposed to have made it obsolete.

I reckon what is good & new today about storytelling is the purposeful use of a crafted narrative to achieve a desired outcome in an organisational setting.

"If you want to motivate your employees, tell them a story, but not just any story..."

'Braintales' is thus targetted at corporate executives, or private individuals, who want to get a handle on storytelling as well as storycrafting, so as to use it as strategy tool for communication.

Historically, storytelling is deeply rooted in all cultures, & had contributed significantly to the richness & continuity of all our human experiences.

Despite all the modern innovations, the attraction of storytelling has not really been lost, as seen in the many annual storytelling festivals, locally as well as abroad.

Looking at my own teenaged years, during which I have had access to many exciting stories in the form of comics as well as those out of Redifusion broadcasts, I dare to say that no phrase excites the imagination more powerfully than 'Once Upon a Time...'.

In the prehistoric era, since the dawn of time (as depicted by the hour glass in the integral imagery), people often crowded around camp fires (as depicted by the burning flame) - to listen to their elders, as they spun stories (as depicted by the movie reel) to entertain, to inform, to teach, to maintain social order, to establish moral precedents, to record history, to remind themselves of old traditions, & to lay down new laws.

In a nut shell, it was an effective way of passing down the lessons learned from one generation to the next.

Looking at it from a deeper level, especially from my own personal experience, storytelling is more than an audience just sitting down there & listening to the story. It becomes a truly interactive event, as each of us bring his or her own vivid imaginations as well as past experiences to the unfolding story.

What is more exciting, there is always a yearning for a good story.

Interestingly, & at least from the neurological standpoint, stories are often how we remember what we have been told &/or what's happening around us.

I reckon the fire element gives another meaning: it's a natural expression of the inter-connectedness of man & his universe, as well as of his balance between the seen & the unseen (as depicted by the seemingly angry faces & darkly-shaded outer boundary of the brain).

In fact, I would add further - the fire element represents the burning passions & inspired imaginations of our early ancestors in making new tools, finding new lands, new ways of living, & inventing new technologies through the spread & sharing of success stories (as depicted by the globe & the swirling letters & numbers).

Well, what I have just demonstrated is the power of creative imagination, which is an essential aspect of storytelling as well as storycrafting.

In the 'Braintales' seminar, Dilip will guide participants to put, via structured as well as imaginative exercises, all their innate talents & unique gifts to good use, productively, purposefully, meaningfully.

I guarantee it will be 'A Creative Experience for Stale Brains!'