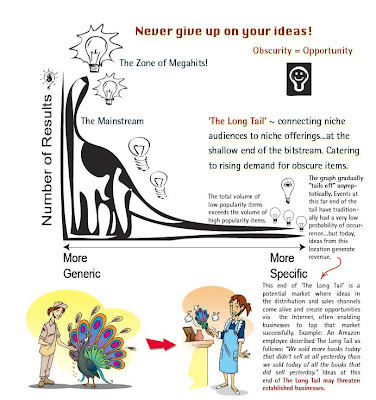 Writing in the 'Ideas on Ideas' edition of The Braindancer Series of bookazines, Dilip Mukerjea exhorts:

Success can lead to failure, and what failed yesterday, could succeed spectacularly tomorrow.

This is the essence of the Long Tail Effect.

Interestingly, the expression ‘The Long Tail’ was first coined by Chris Anderson in an October 2004 Wired magazine article to describe the niche strategy of businesses, such as Amazon.com or Netflix, that sell a large number of unique items, each in relatively small quantities...for substantial returns.

Anderson has later extended it into the book 'The Long Tail: Why the Future of Business is Selling Less of More' (2006).

He has argued that products that are in low demand or have low sales volume can collectively make up a market share that rivals or exceeds the relatively few current bestsellers and blockbusters, if the store or distribution channel is large enough.

The internet is having a profound effect on consumer market dynamics, and it's breaking all the rules.

In fact, for any industry where distribution can be expanded using the internet and the logistics of delivery can also be facilitated, the Long Tail can flip the current market upside down.

The Long Tail Effect happens when the exponentially growing availability of stuff, like news, consumer products, entertainment, and even software, becomes readily available to well, just about everyone.

So, to recap in a nut shell, when a shift like this takes place, there will always be opportunity in the marketspace.

[For more information about the Long Tail Effect, please go to Chris Anderson's weblog on the WIRED Blog Network.

All the images in this post are the intellectual property of Dilip Mukerjea.]
Posted by Say Keng LEE, KNOWLEDGE ADVENTURER AND TECHNOLOGY EXPLORER at 5/21/2009 06:37:00 AM