THE CENTURY OF THE BRAIN! 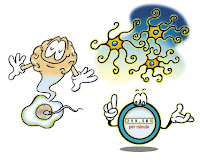 Your brain is a creamy coloured, wrinkled object, feels like a raw egg, and can fit in the palm of your hand.

Brain cells are known as neurons, of which there are roughly 100 billion...that’s the number 1 with eleven zeros after it!

Each of these neurons connects to thousands of other neurons! That’s as many connections as there are stars in The Milky Way! 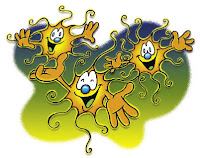 A piece of brain the size of a pinhead contains approximately 60,000 neurons!

A child’s brain is a miracle learning organism. By the age of two, it has twice as many connections between neurons, and uses twice as much food energy as an adult brain.

Every thought a child thinks ripples across his or her brain’s fabulous network of nerves. 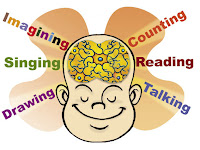 [Excerpted from the 'Brainbabes' edition of The Ingenius Series of bookazines by Dilip Mukerjea. All the images in this post are the intellectual property of Dilip Mukerjea.]

Attention all parents out there! You are your child's first teacher.

Learn as much as you can about maximum brainpower so that you can serve as an effective guide as well as active facilitator in your child's development during his or her growing years.
Posted by Say Keng LEE, KNOWLEDGE ADVENTURER AND TECHNOLOGY EXPLORER at 5/23/2009 08:56:00 AM