WHAT WOULD YOU DO IN THIS SITUATION? 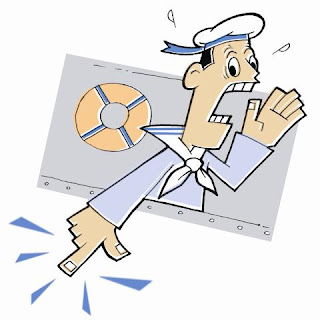 It was a still, moonlit night, and the tide was receding. The Korean War was in progress. An American destroyer lay at anchor off the Korean coast.

Whilst making his midnight rounds of the ship, the quartermaster noticed a black cylindrical object in the water. He was seized by fear. Recognising immediately that he had seen a live mine drifting towards the ship, he sensed imminent destruction. Panicking uncontrollably, he seized the ship's intercom, and called the duty officer and the captain.

They activated the general alarm, which pierced the still night air like a flaming arrow of shrill sound. Suddenly, the ship was abuzz with the entire crew stampeding into action. They frantically considered the options.

Could they weigh anchor? There was no time for that. Start the engines and run them in reverse? The propeller might attract the mine to it. Detonate the mine with artillery fire? It was much too close for that to be a safe option. The truth emerged with dramatic consequences as the ultimate fear of total destruction loomed before them.

However, in the midst of this paralysing fear, one of the seamen on the deck drew from his experience as a volunteer fireman.

"Get the fire hoses!" he bellowed.

"We'll drive the mine away by directing the water jet between it and the ship. We can then get it far enough away to explode it harmlessly."

A terrible tragedy was thereby averted by that simple and practical idea.

Knowledge, memory, a flash of inspiration brought on by perturbation. When faced with a problem, never give up. Draw on your experiences to determine the most practical options available to you.

[Excerpted from 'Brain Symphony: Brain-blazing Practical Techniques in Creativity for Immdiate Application' by Dilip Mukerjea. All the images in this post are the intellectual property of Dilip Mukerjea.]

In layman terms, the above anecdote is a superb example of "Thinking on Your Feet".

In scientific terms, it's an "accelerated logic" application, according to a neuro-linguistic programming (NLP) coach, whose name I have long forgotten. In this case, one's entire inventory of lifetime experiences & working knowledge is brought forth instantaneously to bear on the problem, with the ability of resolving it.

I always hold the view that whenever one is confronted by a problem situation, even if it is an emergency, one always has three options:

with the latter as exemplified by the fast thinking seaman.

That's to say, we have this innate ability to access a higher order of problem solving, when under perturbation, with which we can draw upon our knowledge, memory & inspiration, as long as we don't simply give up, just as Dilip Mukerjea has concluded.
Posted by Say Keng LEE, KNOWLEDGE ADVENTURER AND TECHNOLOGY EXPLORER at 2/24/2009 06:08:00 PM

Email ThisBlogThis!Share to TwitterShare to FacebookShare to Pinterest
Labels: Accelerated Logic, Perturbation, Thinking on Your Feet