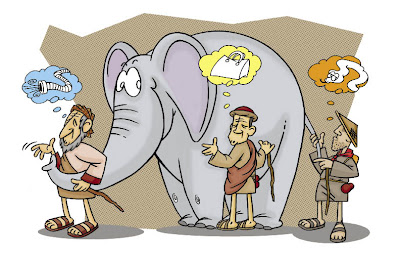 I have taken the liberty of extracting this age-old story from the 'Goldenminds: Unleashing Baby Genius Ages 1 to 101' edition of The Ingenius Series of bookazines available on a subscription basis for parents & kids, by Dilip Mukerjea.

The story has been originally titled 'Is Feeling Believing?'.

"One day, in a distant Asian land, three blind men bumped into an elephant. Not being able to see, they had no idea what they had walked into. Since they could smell the creature, and hear it move, they decided to check it out.

One man grabbed the elephant’s trunk, another its body, and the third, its tail.

Each man explored a different part of the elephant and described what he imagined the creature to be. Unfortunately, they soon started arguing about who had offered the correct description.

The man with the trunk in his hand believed he was holding a hosepipe for hot air.

The man with his hands spread across the elephant’s belly believed he was holding a huge bag.

And the man tugging at the elephant’s tail was convinced he was holding a special type of snake.

They all failed to see that these different descriptions were part of a grand jigsaw that made up the elephant. They failed to recognise the whole truth.

Just the tail, trunk, or body of an elephant does not make an elephant. All the parts need to come together.

Similarly, just knowing a little bit, and then closing your mind to the whole truth leaves you as blind as the three men in this story.

Stay open to many possibilities! It will help you see the big picture!"

Dilip Mukerjea certainly brings up a very pertinent point through the above story, especially as illustrated in his eventual exhortation.

In a nut shell, it's essentially about the significance of having an helicopter viewpoint, or a global overview or a bird's eye perspective about what's really happening around us.

Naturally, it's good to have also multiple perspectives about things, events or people that go around in our environment, but one shouldn't get stuck so easily to a single perspective, or worst still, to a truncated perspective.

From the standpoint of strategic thinking, I firmly believe that a global overview, plus multiple viewpoints, definitely enhances one's appreciation of the landscape, business or otherwise.

Interestingly, it was visionary taskmaster Philip Yeo, while serving as Chairman of the Economic Development Board (EDB), took an helicopter ride one particular day to survey the southern islands, which eventually gave rise to the ultimate proposition of merging seven small islands to form Jurong Island, thus securing big investors to pump money into the envisaged offshore petrochemical hub for our country. The rest was history.

[All the images in this post are the intellectual property of Dilip Mukerjea.]
Posted by Say Keng LEE, KNOWLEDGE ADVENTURER AND TECHNOLOGY EXPLORER at 2/22/2009 04:05:00 PM